Photos from previous Annual Shows held at Castlehackett are available from the following links . .

Between 2007 and 2017 our show was held at Castlehackett . We appreciate the hospitality of the owners for the last decade . Unfortunately the last 12 months of rain has made this site unusable for this years show .

This year 2018 we are moving to the Glencorrib site as it is a limestone area with excellent drainage .

Below is some info relating to the previous site….. 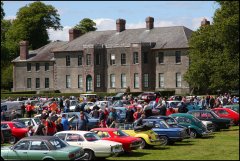 It was built by the Hacketts, a Norman family. The Kirwans, one of the tribes of Galway, settled there in the 15th century. The Castlehacket branch of the family was established in the mid-17th century by Sir John Kirwan. The castle was abandoned in the 18th century and the Kirwans built a new three-story house called Castlehacket which was burned in 1923 during the Civil War but rebuilt and still stands today.

In the introduction to his Fairy and Folk Tales of the Irish Peasantry (1888), William Butler Yeats mentions the family and Castlehacket, writing, “Each county has usually some family, or personage, supposed to have been favoured or plagued [with fairy-seeing abilities], especially by the phantoms, as the Hackets of Castle Hacket, Galway, who had for their ancestor a fairy…

Knockma Hill stands at 170m high and is the most prominent landmark in Caherlistrane in County Galway. It is legendary burial place of Queen Maeve and, in folklore, Knockma was the seat of Finnvara, King of Connacht fairies. The many ancient remains, including cairns, underground passages and forts, are evidence of a major place of settlement stretching back to pre-Christian times.

In the recent past, Coillte have constructed a high-quality tarmacadam drive and parking facilities at the entrance to Knockma. This provides easy access to the wonderful walks and delightful beauty of Knockma. The Knockma Hill area, with its ancient castle and idyllic Castlehackett House, is an inspirational paradise and well worth a visit for a relaxing afternoon.