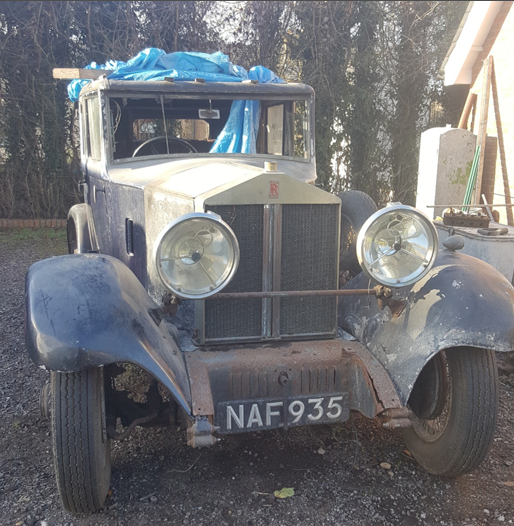 The Story of Rolls Royce Reg. NAF 935 and her “gradual” rebuild

Manufactured in Oct 1929, Chassis GEN 33, with a Barker body, this was one of the last 20hp models, so with all the updates and modifications Mr Royce felt had to be done during the 7-year production build. 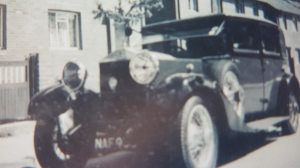 At some time in the 1950’s she was re-bodied by Park Ward, looking far better in my view. 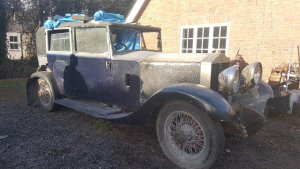 Spotted for sale on December Friday 2nd 2016 while reading Classic Car Weekly in London, called to see the next day and shook hands to purchase this wreck immediately for a mere £14,000! Then the hard work really began

The 1st job was to assess the list of many missing and obviously broken parts to the Rolls and set a rough action plan. I decided to strip the wings, running boards and brackets for shot blasting and etch priming + undercoating, as these were badly needed. Some of the brackets were rusted away to the point of no use….

Sadly, after much careful effort, the crow bar, 12” chisel and hammer with help from an angle grinder was the only way to remove the 88 year-old bolts from the chassis. Mr Royce would not have been impressed.

Even the Battery box suffered from rot and rust, not able to take the weight of the replacement battery

And so, after weeks of “breaking up” the car, finally parts were ready to send off for repairs:

–          Steel brackets, bars, controls to Ger Noone Glencorrib for sandblasting

–          Repaired wings to Keith at Radfix for aluminium welding and repairs

–          Fuel AutoVac box for blasting and assessment to James O’Toole – proved to be fatal, as severe corrosion and loads of pin holes, so a waste of time buying the Petseal

–          Fuel suction device repaired by Liam at the Headford garage, as it needed new fitting and soldering due to the heavy rust sludge in the 12-gallon fuel tank

–          Aluminium suspension bracket to be welded at Radfix 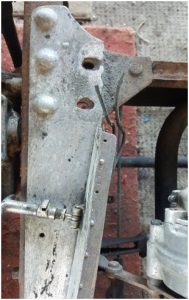 The rotten fuel tank and front bonnet mounts sent to be copied by Patt Rynn Engineering, Galway, along with a huge number of other brackets, clips, shafts, fuel tank cover, starter cover, wheel plates, etc. An endless journey to the docks almost daily. 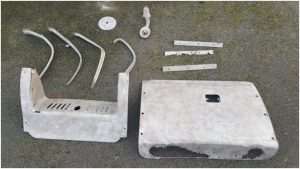 Pat had previously agreed to help on the project, I asked for an apprentice to undertake the work, as the budget was 13k for the complete rebuild, including new paint job, new interior, spares including clock, rear lights, carpeting, replacement roof, wiring, 75% chassis sandblasting etc. 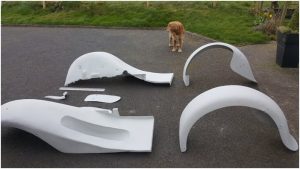 Our dog, Finn, inspects the repaired wings after soda blasting and undercoating.  You could have a “guess the car” competition.

As the car came from the UK, I decided to try and keep it registered there. She started like registered as UW 5505, then was changed to UU 8608 and then, in 14th Oct 1950, changed to NAF 935, with old pics to support this. However, she was never formally registered as NAF935 to the UK DVLA, so after attempts of getting proof of registration, I had to settle of using UU 8608, as this was supported by documents from the RR Enthusiasts club.

With money running out, I decided to spend time taking apart things that wouldn’t cost me anything apart from time. How wrong I was…

Most of the rear end suffered from woodwork rot and old age, crumbling in your fingers, oh dear!

Where do you get rubber door alignment bushes?

Today, 27th May 2017 was a special day, as I woke up having passed my karate Black Belt grading, so thought I should spend money I don’t have – don’t we all….. 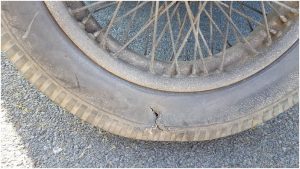 At €75 per wheel for blasting and powder coating, it looks a good deal for a “tyred” old wheel! 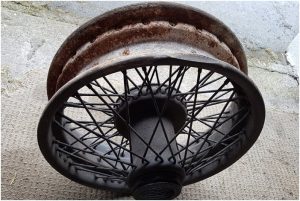